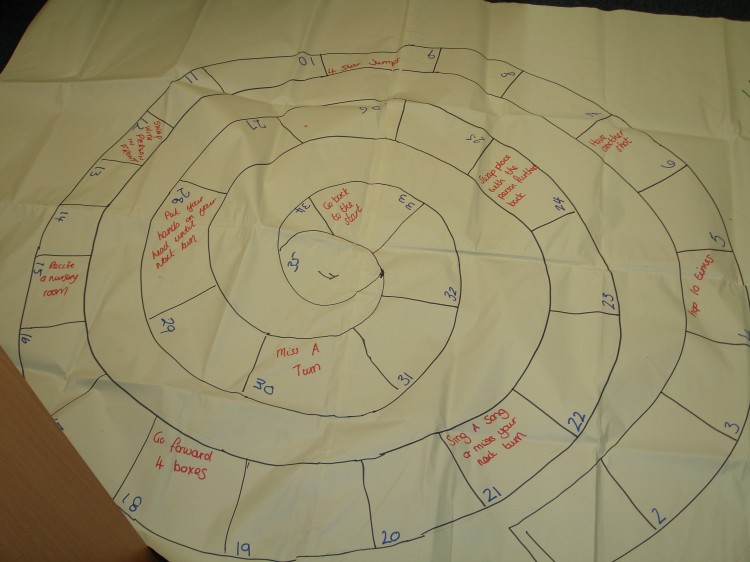 This project involves young people learning about the games played in past years, and older people learning about the electronic games young people play today. Following a discussion with young people about how little they played board games and playground games, Youth Work staff approached Adult Learning staff regarding an intergenerational games project. The games young people played were often computer games, which generally involved little social interaction with others. Following previous successful intergenerational projects with members of the Arbroath 50+ Gold Forum, a joint project between the Forum and pupils at Hayshead Primary School was set up. From the project, we wanted young people to learn about games that were played in the past, and for older people to learn about games, specifically electronic, that young people play today. This meant that both groups were learning from each other.

An afternoon event, organised within the primary school, was the event that the planning group worked together to organise.
The groups met individually four to six times to look at their own games and share them with each other. Workers then organised three meetings between the two groups to give them a chance to meet each other and get to know each other. At these meetings, young people took the lead, showing the older people around the school; and how to set up the hall for the event. The groups discussed and shared their games, which was a good ice breaker; and a way for the participants to get to know each other. It also provided a good opportunity to test the games with each other.

The sessions were supported by youth and adult work staff from the CLDS.

Benefits for the Community

Benefits for the Younger People

Benefits for the Older People

What did and did not work?

From staff observation and feedback from all of the participants, both the planning and the staging of the event were very positive. The games that were played worked well, and there was consistent and positive interaction between the older people and the young people.

What changed as a result?

The Primary 7 pupils were specifically identified by the Youth Worker and the school, because they had concerns about how they would make the transition from primary school to secondary school. Being involved in this project meant they were able to develop their confidence and social skills, able to feel comfortable in meeting and working with new people, and developed their team building skills.

The project in terms of staffing was supported by the Community Learning and Development Service with staff from both Youth and Adult involved.
No other funding was required to hold the event.

The simplicity of the subject choice of the project meant that there was no issue with funding or cost allowing anyone to participate. The project involved local people and was held in the local primary school resulting in no transport issues.

For the evaluation of the project by the Primary 6 participants, a short evaluation form was created asking the following: what did you learn today, what did you enjoy about the day and what games would you like to play again. All of the responses were very positive with most of the young people saying that they preferred playing the older games and they liked meeting the adults and playing games with them. All of them said they would like to play one or more of the games again and share them with their families.

Focus groups took place with the Primary 7 pupils and another with the Angus Gold group to get feedback on their experience of the day.
Short evaluation forms were completed by the Primary 6 pupils. This asked: what did you learn today, what did you enjoy about the day and what games would you like to play again.

An event for 50+ participants is being organised by a local committee with support from the CLDS Adult Learning Team and this will involve young people helping at the event and delivering ICT-focused workshops.

Local priorities are to develop work and engage with adult learners aged 50+ in learning opportunities.

This project contributes to the Scottish National Performance Framework (NPF)

The main NPF objective that this project contributes to is:

These NPF objectives could also apply:

Our young people are successful learners, confident individuals, effective contributors and responsible citizens: To enable children, young people and (subsequently) adults to thrive from an early age, and make a positive contribution in the 21st century.

We live longer, healthier lives: Securing longer healthier lives for the people of Scotland will always be a top priority for governments and individuals alike. There are significant challenges which can only be addressed by everyone in Scotland working together, pursuing this goal through improving lifestyles and life circumstances, and a shared ownership of an effective NHS.

We have strong, resilient and supportive communities where people take responsibility for their own actions and how they affect others: Being part of a strong community gives us the support we need locally. It minimises crime, antisocial behaviour and their social and economic costs.