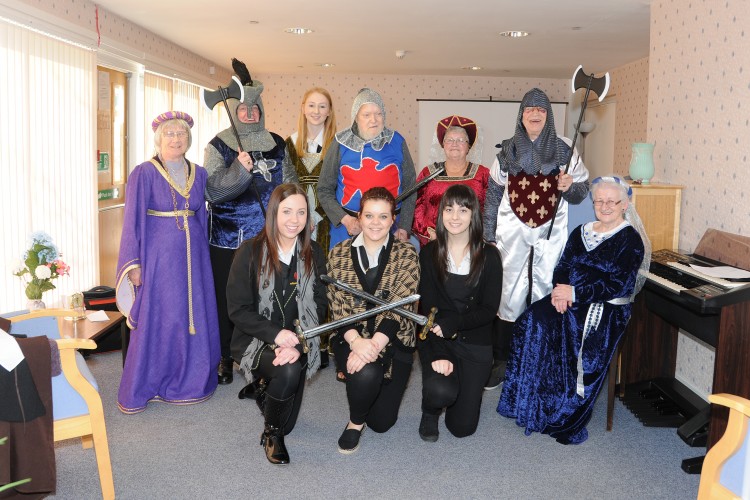 Hamilton Gardens Sheltered Housing is committed to The Reshaping Care Agenda for Older People, and recognises the positive impact of using an intergenerational approach; and the benefits of involving the wider community. Most residents do not leave the unit, therefore the days are very long without activities.

The aim of the project (Parlez-vous) was to provide the pupils with a non-traditional learning environment outside of school; and to give the older people a new interest. Parlez-vous provided the pupils with the opportunity to improve their language skills by researching and preparing materials to teach older people French though a variety of activities through quizzes, games, singing and role-play.

What did we do?

Eleven older and five younger volunteers, aged 16 – 91, were recruited from Stewarton Academy and Hamilton Gardens Sheltered Housing. A member of staff delivered a short information session/recruitment drive to a group of pupils and residents.

To ensure the younger and older people were comfortable in each other’s company the two groups received two preparatory sessions addressing values, attitudes and stereotyping before meeting.

Over 14 weeks, between September and March, sessions of 1 – 1 .5 hours took place. This excluded two days of filming.

Parlez-vous sessions included colours, days of the week, café vocabulary, French bingo and singing. Learning French songs was met with such enthusiasm, that some of the older volunteers suggested writing role-play scenarios which could be filmed. Coverage included a French café scene and a mediaeval sing-song. The older volunteers took care of the props and decoration of the room, and the pupils researched costumes. Most of the participants were involved in writing the dialogue for the film.

Once edited, the film was shown to an invited audience, which included the Head of Schools and of Social Services, Elected Members, and Voluntary Arts Scotland. It was also shown at East Ayrshire’s Older People’s Conference; and at other intergenerational workshops.

The project was facilitated by a member of staff from the Volunteer Centre with support from the care co-ordinator at Hamilton Gardens. A free-lance arts worker was involved for a few sessions.

Benefits for the Community

Benefits for the Younger People

Benefits for the Older People

This project contributes to the Scottish National Performance Framework (NPF).

The main NPF objective that this project contributes to is:

These NPF objectives could also apply:

Our young people are successful learners, confident individuals, effective contributors and responsible citizens: To enable children, young people and (subsequently) adults to thrive from an early age, and make a positive contribution in the 21st century.

We live our lives safe from crime, disorder and danger