‘We can still ‘Bee’ Together’- Intergenerational Bee Project 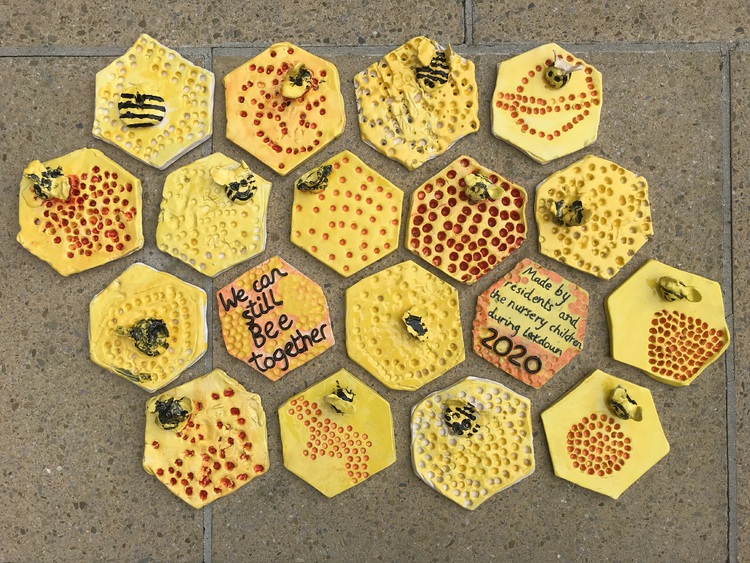 An intergenerational activity project which took place between 10th November – 8th December 2021 at Apples & Honey Nightingale (co-located setting) with a focus of maintaining a level of interaction between the care home and the nursery while following social distancing and covid guidelines.

Objectives:
● To create a pottery project based around our bee hives
● To integrate educational elements into the sessions that are inclusive to both our residents and the nursery
● To demonstrate ways to share skills in the creative process.
● To experiment with technology and ways to connect virtually
● To introduce new residents to a creative activity

Activities
Each week on a Tuesday we focused on a different topic about bees. A simple clay technique was chosen to reflect each topic and allowed for a good level of engagement on both sides.
Tuesdays am – preparatory work. Wine residents helped with collecting research about the bees on the internet, prepared materials for the afternoon activity and helped to film introductory videos for the nursery.
Tuesday pm – pottery session and resident tea.

Week 1 – The Queen bee and her swarm – Making bee decorations out of clay, which were then painted once dry
Week 2 – Bee Hive structures/ Making clay coiled pots to resemble beehives
Week 3 – How do Bees make Honeycomb? – Making hexagonal honeycomb tiles out of clay to then paint once dry then assembled to create the inside of the hive
Week 4 &5 – Hannukah. We had two breakout sessions for a special Hannukah Project. Residents and children made a joint Menorah by drawing around their hands onto the clay surface and swapping over to symbolically join hands together. Once painted each participant was able to take away a piece of work that had their hand and a resident/ childs hand creating the 8 days of Hannukah
Week 6 – The Busy Bees complete their hive! The final session was held on zoom with our Queen Bee giving out crowns for everyone to wear in celebration of the project

Room set up
Four sessions took place in the large lounge with Wine household and the nursery group, screened by the patio doors. Sessions lasted up to an hour followed by tea for the residents back in the activity hub. One session was carried out on Wine household during the precautionary lockdown where we linked up with the nursery via zoom. The session wasn’t as engaging as it was hard to hear the children through the television and the communication by nature is different when virtual. However it was nice to keep the continuity of being together in some way and both groups were very focused on their tasks (painting their Menorah’s) so it worked sufficiently for the activity.

Additional activity : Experimenting with Film
We all know how important technology has been this year in staying connected. So, to make the most of this platform, residents helped to make two films for the nursery as a way to introduce the bee project and the special Hannukah activity. Filmed on an iPad and edited in iMovie they were a nice way of connecting with the nursery in advance of the projects starting. Residents found it quite amusing being filmed – especially watching the bloopers back! We came up with a script and filmed in various locations to produce a dynamic piece that would get the children excited about the upcoming project. Residents enjoyed the role of presenting the videos and being part of the children’s engagement in this way. It was nice to be able to empower the residents in this way, giving them a sense of purpose.
In future this could be a way to remain connected remotely with the nursery if we are unable to meet physically. Combined with linking up live via zoom, pre recorded ‘how-to’ videos which involve an element of participation from the children help to create the idea of sharing and working on the same activity together but separately as well as supporting the relationships residents have with the nursery. The videos were fairly quick to produce requiring only half a day of time to film and edit. I think the format could be recreated for a variety of activities and topics and could be a really fun way of engaging with each other

Outcomes
Being able to adapt to ways of being together during this time has been so important. Residents have really valued spending time with the children and their willingness to do so is testament to the fact that most of the residents wouldn’t normally have participated in a pottery project! So, it is thanks to them that so many residents chose to join a new activity. I think the project had the right balance of interaction, creative activity and learning that was possible during this time and fulfilled the need to try and be together as a community. The partnership during the Hanukkah project in particular was a really special moment and really symbolised the special connection Nightingale and the nursery have. Being able to engage the residents in the research element of the project was an important way to interest and include them. They felt like they were also learning and discovering new things for themselves about a topic which was fairly new to them and empowered them to be part of the preparation rather than just participating. Making time to serve tea after the activity in the hub for residents became a really valuable part of the activity too. It allowed the residents to debrief after the time spent with the children and developed into a relaxed discussion group which was self prompted by the residents. I’m pleased that the project allowed for the time and space for residents to do this and is something that should be encouraged off the floor where possible.

Although the project took place in England elements can still be measured against the Scottish National Performance Framework (NPF).