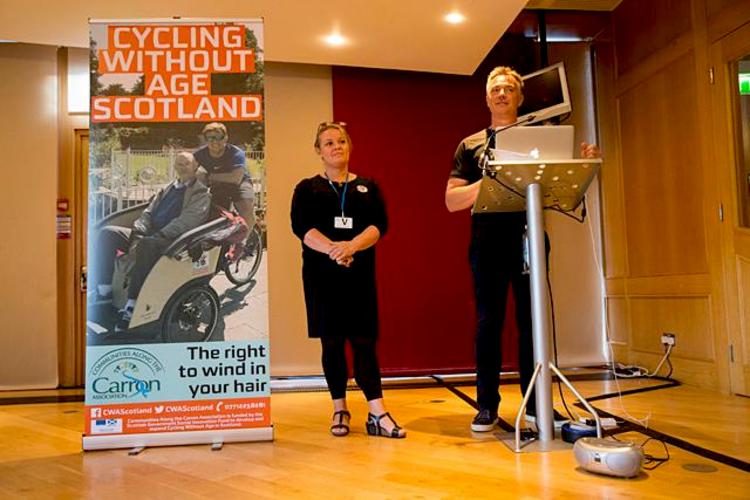 Interview with Ole Kassow, founder of Cycling Without Age

Kate – “What was your background before Cycling Without Age?”

Ole – “I have always been interested in making a positive change and to build stronger communities with a focus on social justice. Before Cycling Without Age, I started a company called Purpose Makers where we work with companies on how they can change their focus from being profit oriented to becoming happiness oriented and how that shift in focus is actually also good for the bottom line.”

Kate “How did Cycling Without Age start? What sparked the initial idea?”

Ole – “I saw an elderly gentleman sitting in front of a nursing home, as usual, I was on my bike and came up with the idea that maybe he wanted to join me and we could get to know each other. I rented a rickshaw and it took off from there. The man became my friend, his name is Thorkild.”

Kate – “Cycling Without Age Scotland launched this year in Scotland, but when did it all begin in Copenhagen?”

Ole – “It started in Copenhagen in 2012, we’re now represented in 37 countries. It’s a concept that appeals to people on all continents.”

Kate – “Why do you think it has been so popular?”

Ole – “There is a large population of elderly people in most major cities. Our modern fast-paced lifestyle means that we value youth and careers and sometimes forget to appreciate the older generation and their wisdom. That means many people become isolated and lonely as they grow old. At the same time, the big cities have become more congested by cars and are polluted, which gives cycling a well-deserved comeback. These two themes are integrated into Cycling Without Age concept, which appeals to people of different background, culture and age.”

Kate – “From your speech at the Scottish Parliament we heard that a high percentage of Copenhagen’s residents cycle daily, do you think this helped your project take off and why?”

Ole – “We are fortunate to have good cycling infrastructure in Copenhagen. Most cultures have a tradition of cycling, not just the Danes. Usually, our passengers, from Singapore to San Francisco, cycled in their youth. That’s why sitting on a bike again really brings back memories of good times.”

Kate – “Who were your initial supporters for the project? Was it the government, ordinarily citizens, charities or a mix of all?”

Ole – “After my first ride I contacted the municipality of Copenhagen. Luckily the woman who I spoke to understood the concept right away and said this was the exactly the kind of thing she had been waiting for. That woman is Dorthe Pedersen, the co-founder of Cycling Without Age.”

Kate – “How did you gain funding for this project?”

Ole – “We work with the municipalities, care homes and foundations. Recently we have also started working more closely with corporations and we hope to develop a programme soon that offers community bikes where elderly people who live at home have access to the rickshaws too. Many bikes are also fund-raised through crowdfunding efforts by local community projects.”

Kate – “How did the project grow from Copenhagen based to international fame?”

Ole – “Luckily the media have taken an interest in what we do and we see how the interest is often sparked by a story in the news. The first international interest came after my TED Talk in the autumn of 2014. Recently the BBC video “Amazing Humans” about Fraser and Mary in Scotland was shown 26 million times. Cycling Without Age addresses challenges of loneliness and active mobility, which seem to appeal to everybody.”

Kate – “What would your advice be to anyone looking to start Cycling Without Age in their area in Scotland?”

Ole – “The most successful chapters worldwide are started and run by local teams of 4-8 people, so my advice is always to form and a local group of changemakers. We have a crowdfunding campaigns on crowdfunder.co.uk, which new affiliates can be part of. The first thing you should do, however, is to have a look at our website and find the other changemakers in your local area. When people work together the whole community is strengthened, people feel more ownership and the initiative has a much bigger chance of succeeding and becoming sustainable.”

This article is part of our winter campaign, Intergenerational Inspiration from abroad. If you would like to share your story for the campaign or have a question, let us know by contacting Kate or through our tag #gwtinspiration

As a member, you can promote your Intergenerational Project activities in our news pages. Submit your story now ›